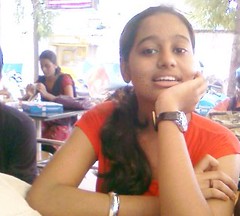 Meet Batul Kapasi, a final year student at Mumbai’s KC College, specializing in Mass Media. As a student, her interest in photojournalism enabled a useful stint at Pudhari Publications – a leading Marathi newspaper. She also works as a freelancer for entertainment websites, and takes on shooting assignments for events, weddings and corporate films.

Batul is a young socially driven movie maker with a message to share. Play simple, play fair and understand the environment you live in. Don’t attempt to sideline people based on caste, religion and circumstance.

I got in touch with Batul after I saw her “Judgemental” film on YouTube, a short film about a young student in a Mumbai first class compartment, questioning a transgender woman if she’s got into the compartment by mistake. I followed that up with an interview with her for my Big on Talent blog, and here are her responses to some of the questions I asked her.

Q: How did you come up with the idea for the Judgemental film? Was it a specific incident? Was it something on your list of ideas? What was the prompt, or inspiration?

I use the local every day to get to college and move around Mumbai. And when I’m in the train I get to observe people from close quarters. And there’s a lesson I learn every day in understanding people – around their worries, concerns, hopes and aspirations. I also get to observe people’s prejudices. Talking about prejudices I once saw a young student questioning a lady who had got into the train at Ghatkopar Station – only to be surprised that she had a valid ticket. The discomfort and disgust displayed by the girl got me thinking – this was movie material.

This was around the time I was working on my “1-Minute Series” and this new idea was a nice inclusion.

Q: How did you go about the production? What equipment did you use? Did you have someone to guide and help you? How did you put this together?

I used basic equipment for my Judgmental film – a Canon 70D and a 50mm 1.4 lens, which I borrowed from a professor at college. New Sound Films/EEG Talent helped me produce this film. This production house is a great platform for budding filmmakers and writers and is owned by Nick Rajsakha, Tejas Rathod and Kunal Kothari. They are also helping me produce other films I have in mind, including Dharavi Dreams which will be released on a much bigger platform.

Q: How did you arrive at using a transgender person for this film? Did you consider other options?

I did a lot of soul searching before picking the cast for this film – I also chatted with people at college and other professionals I work with. Virtually everyone liked the idea I had conceived – and were curious about my next steps, as it was a completely offbeat film.

Initially, I thought of using typical profiles that would stand out in a first class compartment – but I needed to make a bigger impact. That’s how the transgender narrative came into my storyline – and this was easier said than done. My first option was to use an actor, but that didn’t work for more than one reason. I had to get someone from the transgender community to play that role – I didn’t want to rewrite the script to make things easier.

That’s when a good friend of mine, Isha, came to my rescue – useful because she was associated with the Kashish Film Festival. Isha introduced me to Shreya and I instantly knew I didn’t have to look any further. Shreya was just right for the role of the Ticket Collector in the film, and Drashti Thaker did her part well as the student with discomfort written all over.

Q: Did things get out of hand during the shoot? Curious people? Passengers? Other ticket collectors?

Well, Murphy ’s Law always comes into play when you’re shooting – even when you’ve planned things carefully and are completely equipped. When I was shooting the establishing shots of the film, the police cautioned me twice and warned me that they would take away my camera. They really had no idea what I was doing, and I just wanted to wrap up the project without any incident.

When we were shooting at CST, the train suddenly started moving and I realized that people would start pouring in at every station. Around the space I was shooting, passengers were both amused and curious – to my relief, it looked like they were being entertained.

Q: What has the response been for your film? From the transgender community, from professional support groups, from peers, from colleagues and friends.

I must say that I have reason to be ecstatic – viewer response has been good and encouraging. The film has already crossed 1,00,000 views, much to my amazement. And that’s a lot of people who are seeing your name flashing on the screen – it feels awesome and I think well deserved – because a lot of hard work went into it. Shreya, my lead in the film shared it with her transgender group; people like Harish Iyer also shared the film on social media. I also got positive feedback from other members of Shreya’s group while shooting another documentary. There were calls, messages and likes on facebook – more than I had ever imagined. Even shoutouts from people I didn’t even know. All this makes me feel blessed.

Q: How did you get into story telling with a message? What got you into this space? How many films have you made? What plans do you have for the future?

When I was a kid, I was fascinated with stories and story-telling. The stories that I heard from elders at home had to be shared, and I was always thinking of interesting ways to do that. I must add here that my story-telling skills found true expression when I did theatre. Theatre enhances the way you think and develop ideas and makes you realize the importance of time.
Cinema on the other hand is a powerful medium when you want to share your message with a large audience. I have made thirteen films so far – including short films and documentaries. The last film in my “1-Minute Series” will soon be done and I will move on to other projects on my project list. It’s encouraging to have a basket of ideas, waiting to happen – gives you so much to look forward to.

Q: What are your other interests? Where does life take you in the years to come? What you plan to do and maybe, a future perspective…

I love star gazing – I’m a born star gazer. I really like talking to people to know more about their lives and the different worlds they live in. In this journey of storytelling, I hope to understand life better and with more meaning and purpose. I want to travel to places that can inspire my passion for storytelling. I think travel can free your soul and lead you to newer meaningful directions in life – even if you sometimes think you are lost on that journey.

In the not too distant future, I can see myself directing a feature film and a play. To be honest, I don’t know what’s coming – but I am sure whatever is on my way, it would be worth it!