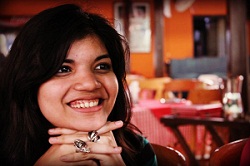 Meet Vihan Damaris of Bangalore.
A 21-year-old singer, songwriter, musician and painter. As a bright-eyed toddler, she probably learnt to sing faster than she could learn to speak. And when most young girls are giggly teenagers at 15, Vihan was writing inspired lyrics and composing music.

Vihan writes contemporary Christian lyrics to the beat of pop, rock, soul, blues and R&B. Her song ‘Love India’ won her the Best Music Video Student Award at the Indian Cine Film Festival ’15 – against a backdrop of over 600 entries from 90 countries. The song was also aired on Radio Indigo to rave reviews from the hosts of the show.

She is currently experimenting with oils on canvas, under the watchful eye of her mother, Rayla Noel, who is an accomplished painter in Bangalore. Vihan is also helping her mother explore the viability of an online art gallery for her paintings – the project aims to tap into the growing art markets on the web.

Q – You’re musically inclined in more ways than one – how early did you start playing the piano, or the guitar? Do you feel you’re special, or gifted? How many songs have you composed?

I’m not sure about being special, or gifted, because I do come from a very creative family – and there was always music in the house. I sat at the keyboard when I was fifteen years old and wrote my first song. At sixteen, I finished a one-semester course in music with a Grade-1 in piano. At seventeen, I joined my college rock band and learnt to play lead. At eighteen, I was asked to play bass guitar in church, and added bass to my repertoire.

I’ve written over 30 songs over the past six years and singing my own compositions was a natural extension. I’m still discovering my style of music and developing instrumental and composition skills alongside lending voice to this effort.

Q – What kind of music do you like? How has this helped in your little world? I’m referring to Christian music as a medium of expression, or something that truly appeals to you.

My little world of Christian music is influenced by many people, experiences and exposures. I listen to all sorts of music, although rock music tops it for me. ‘Alter Bridge’ comes to mind here – they have the sort of honesty and brilliance of composition that I admire. I do hope my version of Christian music has the brilliance to transcend religion and belief – reaching anyone who enjoys meaningful music.

Sometimes the music I’m listening to has a direct influence on what I might do next. For instance, when my mother asked me to visualize a tune for her poem of prayer called ‘Father I Kneel’, I unintentionally used the chord progression of ‘Love the Way You Lie’ by Eminem ft. Rihanna – the result was a beautiful synergy of two diametric worlds.

Q – Tell us about your “Catch Me” song, and how it evolved into a music video?

‘Catch Me’ describes my personality so well. I was just discovering what it meant to be a Christian and maybe it wasn’t really what I wanted. I told God in a frustrated moment of prayer that I couldn’t be that person and He led me to write this song. He understood my faults and was willing to be there for me each time I failed.

Before ‘Catch Me’, I didn’t even like to see myself in photographs – leave alone music videos. However a new window opened for me at a ‘Parra’ camp (a church, also the name of their rock band) where I chose a video workshop and found to my surprise it wasn’t such a big deal. So I came back and planned a music video. I did it with the help of two people I was willing to be embarrassed in front of – my parents. That was the start of more music videos, and bolder expressions.

Q – Your dad’s a sound engineer, and your mother’s an artist – what more can anybody ask for? Tell us about the supportive environment you grew up in and how your parents did a lot more than point in the right direction?

My parents are both artists and musically gifted, and they have opposite personalities – practical versus creative – but put together there’s an amazing balance and chemistry. My parents are my fire-starters, they have taught me the right values, and they encouraged me and my younger siblings with our creative interests. When I desperately wanted to join the rock band in college, my father picked up a guitar so I could audition the next day – I discovered later that he had spent all that was left for the month. How we recovered from this was a miracle – and I have seen many such miracles taking us through, from one day to the next.

Q – What plans do you have for the future? Where do you see yourself going? Tell us about the road ahead …

I think everybody has a purpose in life – they may not always be aware of it. They become special when they find that purpose and work towards it. My parents taught me to sing and play instruments through example – a process that helped me discover my inner talent.

It’s hard to not daydream once in a while, but I see a lot of things falling into place around me. In essence, I am a worshipper of the Lord – it’s the most important thing I do because everything else comes as a result. Who or what I’ll finally become, I don’t know – all I know is I’m getting there.